10 Most Dangerous Camping Spots According To NPS

Camping is one of the most popular outdoor activities that millions of people partake in every year. It offers many physical and mental benefits and its a great way to spend time with family, friends, or even on your own. However, there are certain camping spots — national parks in particular, that can be pretty dangerous.

U.S Nationals parks are a paradise for camping, hiking, and backpacking enthusiasts across the United States and the world. These beautiful landscapes and their geography present a hazard to visitors that aren’t careful enough. With their rise in popularity as some offer free camping for visitors and increase in visitors year after year, there are higher risks of potential casualties as more people visit. The team at Summer Camp Hub wanted to collect data to figure out what some of the most dangerous camping spots were in the United States.

To gather the data, we submitted a Freedom of Information (FOIA) request to the National Park Service. Here we present this data along with other facts that include comparison between the major causes and the male to female ratio. These spots mainly cover national parks commonly used for camping, hiking, and backpacking, but also include national recreation areas and parkways.

Most Dangerous Camping Spots According To National Park Service Data

Figure 1: A table outlining the top ten camping spots along with the total number of casualties, main cause and casualties for that main cause.

Lake Mead National Recreation Area covers nearly 1,495,806 acres in Nevada and Arizona. It’s the third most visited park due to its beautiful make up of mountains, canyons, and lakes. This giant area is also the most dangerous camping spot, with a high of 234 deaths. The most common cause of death was drowning at 97 deaths. Considering that most people visit it for the lake, it’s no surprise that drowning is the leading cause.

Located in Arizona, the Grand Canyon is one of the most famous and visited national parks in the U.S. Expanding over 1,218,375 acres, the sheer amount of visitors each year plays a role in the likelihood of numerous casualties. Despite the countless potential high drops, most casualties aren’t due to falls. The vast majority are a result of medical issues, with a total of 47. The hot temperatures found in the Grand Canyon play a role in that figure.

Situated in California, Yosemite National Park is another of the United States’ most visited national parks. Covering close to 748,542 acres, it’s also one of the largest parks and is popularly used for car camping. However, its massive size and geography make it quite dangerous for travelers. Since 2007, nearly 145 people have perished at the park. The picture-perfect spots found throughout the park are one of the main reasons falls are one of the leading causes. Falls have claimed the life of 51 people.

The Glen Canyon National Recreation Area is located between Utah and Arizona and measures 1,254,429 acres. There are quite a few campgrounds here operated by the NPS and other private sites close by. The geography is composed of rugged desert terrain, which makes it quite dangerous. Since 2007, there have been over 103 casualties with the majority of them resulting from drowning at 41 — in which most occur at Lake Powell.

The Great Smoky Mountains National Park is found in the southeastern United States between Tennesee and North Carolina. It measures 522,427 acres in size and offers a variety of campgrounds for different campers, including one for horse campers. The mountainous range is responsible for 101 casualties, with 44 of those coming from motor vehicle crashes. The narrow roads and dangerous blind curves make driving difficult and responsible for the many fatal crashes that occur.

Natchez Trace Parkway is a 444 mile-long forest trail that extends into Tennessee and Mississippi. The area offers several different popular camping spots that are completely free and offers scenic views along the way when car camping. However, this road stretch has claimed the lives of 100 people. Unsurprisingly the vast majority of them at 85 have been due to motor vehicle crashes. If you’re car camping or RVing and happen to visit, remember the speed limit is 50 mph and drive with care.

Similar to the Natchez Trace Parkway, the Blue Ridge Parkway is another scenic road in the U.S. There are also a lot more campgrounds offered along the way. It’s slightly longer than its counterpart at 469 miles and offers close views of the Appalachian Mountains. The dangerous roads have claimed 93 lives, and 65 of them are due to motor vehicle accidents.

The Golden Gate National Recreation Area comes at the 8th spot on our list. It makes up one of the smallest spots on our list at 82,027 acres, and it’s well known for the iconic Golden Gate Bridge. The Bicentennial Campground is the most popular campsite. A total of 83 people have perished here, and over 20 of those are from drowning. With the Pacific Ocean and the common rip currents in the area, swimming can be quite dangerous.

The Sequoia & Kings Canyon National Parks are two combined national parks found in California that make up a total of 865,964 acres. There is a combined total of 14 campgrounds, and you will need to make a reservation if you want to camp here.

There are many mountain ridges found in the parks, which can be pretty dangerous if you’re hiking. The parks have claimed the lives of 82 people, with 27 of those due to falls.

The Mount Rainier National Park is located in Washington State. It’s 236,380 acres big, and most of it is pure wilderness. The park is open year-round and on average, a total of 2 million people visit Mount Rainier every year. There are designed camping spots around the area found at different elevation levels. Since climbing is quite popular in the area, there have been 64 lives lost and 24 of them have been from falling. 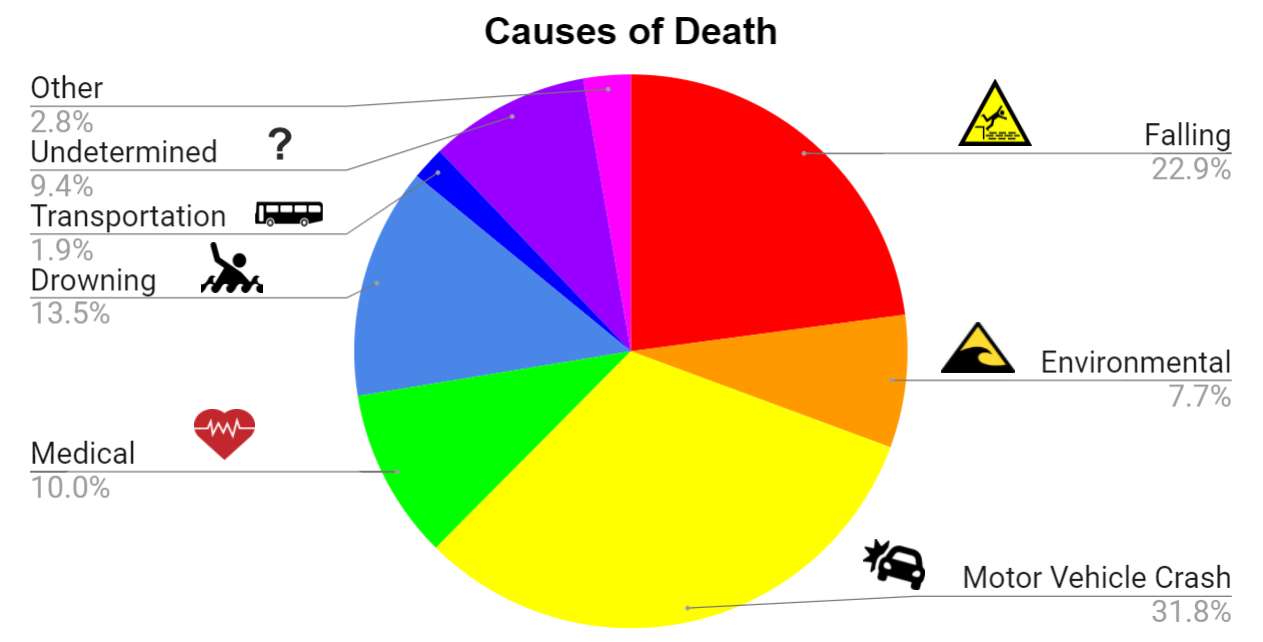 Figure 2: A comparison of the total number of deaths separated by the following categories: falling, environmental, vehicle crash, medical, drowning, transportation, undetermined, and other causes at these ten camping spots.

Motor vehicle crashes were the leading cause among these ten parks. The second most common occurrence is due to falling, and drowning is right after that. National parks aren’t always the easiest to traverse with narrow roads and blind curves. Similarly, the spectacular views and mountains found at some of these temp hikers and backpackers for pictures contributing to falls. But, the terrain can also sometimes be rocky and slippery. Drowning is common in areas with large bodies of water. Unsuspecting riptides have claimed the lives of many visitors, so it’s important to research beforehand potential dangers at these places. 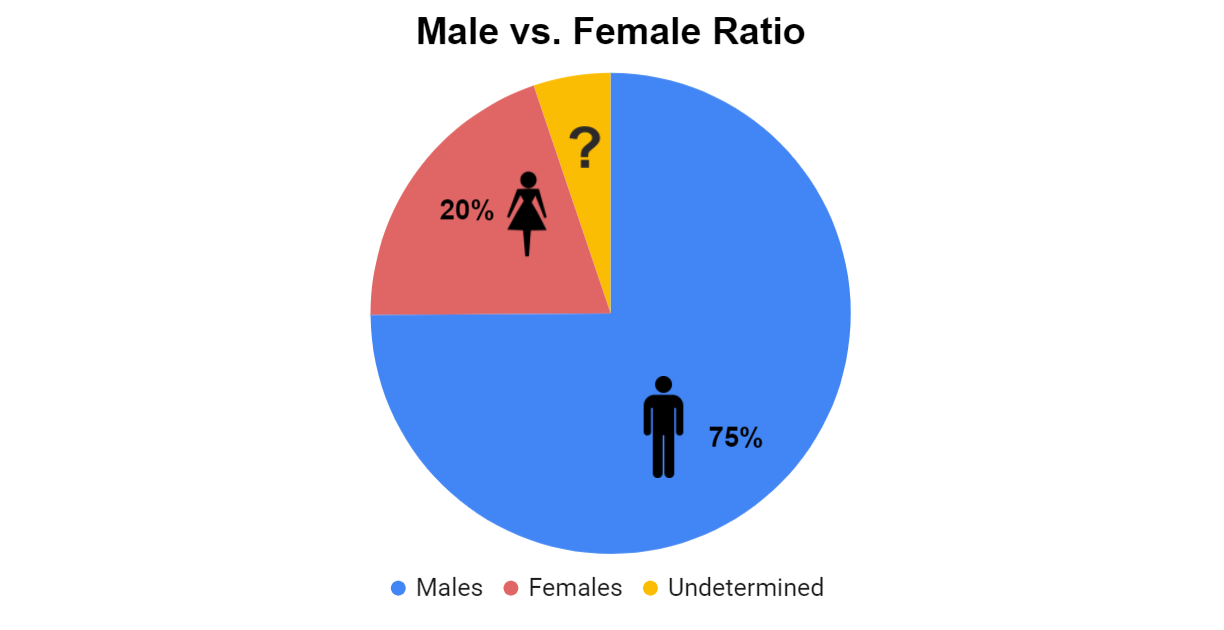 Figure 3: The total number of Male, Female, and undetermined deaths among these ten camping spots.

There was quite a significant disparity in the male deaths compared to female deaths. With 75% being male, 20% being female and 5% being undetermined. There is no clear answer as to why that might be the case.

All data was collected from a Freedom of Information (FOIA) request submitted to the National Park Service. It covers all 63 national parks, all recreation areas and national parkways. The data starts from the year 2007 and covers through the year 2020. We analyzed the data and present it in a readable format with this article. The data provided isn’t to discourage visitors to the national parks, but simply to help them become aware of the dangers and take more precautions on their visits.

If you’d like to use any of the statistics above for your articles/stories, please feel free to use any or all of them, including images and graphs. We just ask you to give us credit by referencing our websites homepage or this article.